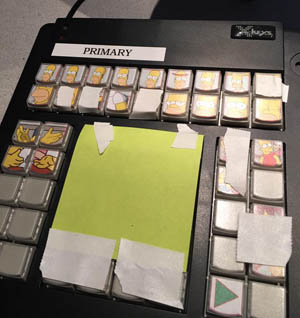 Adobe Character Animator, a new feature in Adobe After Effects CC, used Castelleneta’s voice to animate Homer’s mouth while the X-keys controlled Homer’s head, arms, and hand gestures. David Silverman refers to this process as “animation puppetry.” Characters drawn in Photoshop or Illustrator are imported to Character Animator. The lip-sync animation is driven by the spoken audio. Although not used on The Simpsons, a webcam can be used to capture the voice actor’s head movements and facial expressions and transfer them to the animated character.

"We created a live interface so animators could get immediate feedback on their performances, but as more people asked about live broadcasts, we knew we had something special," said David Simons, co-creator of Adobe After Effects. "I’ve been a fan of The Simpsons since the early 90s, so, when they contacted us, we jumped at the opportunity to work with them on their first live broadcast."