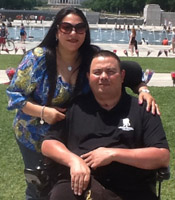 Captain Luis Avila, U. S. Army at Walter Reed, was severely injured by an improvised explosive device in Afghanistan at the end of December 2011. On his fifth wartime deployment at the time he was wounded, Captain Avila lost a leg and sustained a severe brain injury. His road to recovery was complicated by two strokes and a heart attack suffered early in his course of treatment. From Afghanistan, Captain Avila was transferred first to Landhaus, Germany and then to Brooke Army Medical Center in San Antonio. In July 2012, he was admitted to Walter Reed National Military Medical Center in Bethesda, MD.

President Obama recently shared part of the Avila's story in a White House "Salute to the Troops" introduction.

Using our PS/2 Host Emulator to capture scan codes from a PS/2 keyboard, we wrote an application to use Windows Text to Speech feature independent from the accessibility settings. We dubbed the application Key Speak (free download here).

Shift, Alt, and Ctrl also require two presses and are held down (like Sticky Keys) until another key is pressed twice. A different confirming tone is used to indicate the state of the modifier. They work cumulatively such that a “Ctrl+Alt+Shift+X” macro is possible.

Key Speak does not support the Caps Lock, Num Lock, or Scroll Lock states. However, it does recognize the key presses. For our test case, we programmed the commonly used macros Ctrl+C, Ctrl+V, and Alt+F4 on these keys respectively.

Key Speak works right out of the box, but it also uses a simple text file for configuration which is human readable and easily edited in Wordpad or any text editor. Macros may be created for any key on the keyboard. The vocabulary for the Text to Speech feature may also be edited. Thus our macro keys may be identified as “Copy” and “Paste” or as “Control C” and “Control V” at the user’s preference.

The Host Emulator essentially turns the PS/2 keyboard into an X-keys device. PS/2 scan codes sent from the keyboard are captured before they get to the operating system and converted to our X-keys USB HID messages.

Key Speak receives our HID message and triggers Windows Text to Speech on the first press of any key. Two sequential presses of any key will send a USB keyboard message to the operating system.

The method used for sending USB Keyboard to the operating system does not support boot level keyboard messages. Thus the “Ctrl+Alt+Delete” combination will go to the OS, but not at the level required to trigger a Windows reset. The same is true for the Windows key. We solved this for the client by adding an X-keys Stick programmed at the hardware level to send “Ctrl+Alt+Delete”. One of our X-keys USB Switch Interface devices could also have been employed.