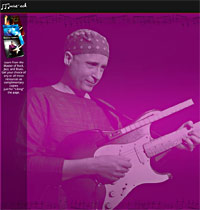 "SuperCollider can do just about anything when it comes to creating sounds for live musical applications and the X-keys stick gives me instant access. So I'm a kid in a sound-candy store."

"The X-Keys Stick lets me select SuperCollider patches right from my guitar. You will notice that the sound I'm using here is a combination of delay and reverb."

Bruce Arnold (born 1955 in Sioux Falls, South Dakota, USA) is an author, composer, educator and guitarist residing in New York City. His explorations into the applications of 20th century classical theory in contemporary forms such as Rock and Jazz has created a unique compositional and improvisational sound. As a guest artist Arnold has toured Australia, Canada, the Caribbean, Europe, Japan, Mexico, Russia and the United States.

SuperCollider is an environment and programming language for real time audio synthesis and algorithmic composition. It provides an interpreted object-oriented language which functions as a network client to a state of the art, real time sound synthesis server.

Our 30 day, no questions asked return policy lets you evaluate an X-keys Stick risk free. If you are not impressed by its performance, return it for a full refund.