"The X-keys panel has been great for us. Other control panel solutions would have cost thousands of dollars, which is tough in such a competitive industry where profit margins aren't always the greatest.”
– Adam Grunseth, Northwest Event Video

Most of the information in this article was gathered from Adam Grunseth’s post on the ATEM User forum. 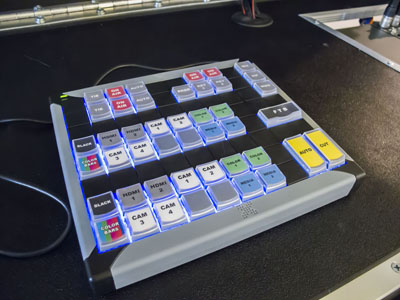 I'm just using Photoshop with the BM ATEM export plugin for graphics. You can see the PC in the case in the pictures. Besides that I'm not using any additional hardware or software for lower thirds.

Pre-produced title animations, as well as other pre-produced segments, I play back from the Hyperdeck.

Cooling is pretty basic- Just a simple intake and exhaust fan to keep air moving through the rack. I try to keep good spacing, and keep the cables out of the way so there is plenty of room for airflow.

And yes, I am switching and streaming from the same PC. I am using MX Light for streaming, using direct streaming instead of re-encoding, this way the computer has very little work to do for the stream. For control I am running Just Macros and the X-keys XK-80 panel from PI Engineering. Usually then I run Photoshop for graphics while MX Light streams and Just Macros handles control in the background. 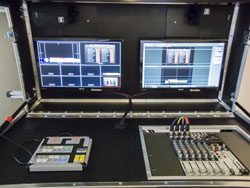 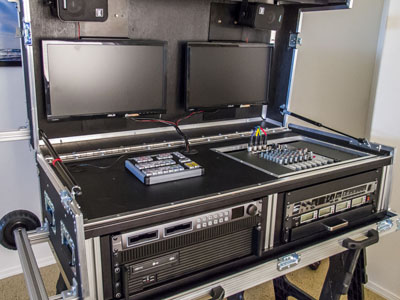 PC Component
I don't remember all the details about the hardware I put into the PC, but I will share what I do remember -

About the audio system I am using, I am happy to share the pros and cons

Let's start with the pros -

See the X-keys in action in their promo video:

Our 30 day, no questions asked return policy lets you evaluate any X-keys risk free. If you are not impressed by its performance, return it for a full refund. More info...