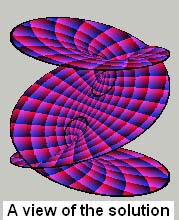 The cubic equation can be reduced by displacement and scaling (see below) to the form:

X is thus a multi-branched function of the single complex variable Q. The solution is found by the substitution

Where Fn (n=0,1,2) are the three complex cube roots of 1. The sqrt could have a negative sign but the result is the same so that there are only three branches corresponding to the three cube roots of 1. Note that by determining w and then substituting into w+1/w only one Fn is associated with a given root.

Visualization of the topology of the solution

The following panels show the three branches of the solution in the complex Q plane. Real and imaginary axes of Q are shown. I have shown the real and imaginary parts of X as colors: Red for the real part; Blue for the imaginary part. The color intensity going from 0 (black) to 255 (full intensity) every 0.2 unit in real or imaginary part. X is plotted in this way on the complex Q plane inside a circle of radius 2.5 Shown on each plot is the branch cut by a heavy black line. Thin vertical lines show where Re(Q) is + 1 or –1.

These graphs are almost quantitatively useful. That is, given a complex Q within the graph one can find the point corresponding to these values and then by counting red and blue stripes from the center of the center graph estimate the real and imaginary parts of X. BUT that is not what we want to emphasize (after all we have computers for that sort of thing).

Even with these three graphs it is still difficult to visualize the full topology. Therefore I now show a surface in three dimensions (Re(Q), Im(Q), Re(X)) colored in the same way and projected so as to help visualize the topology.

Three views of this surface are shown to help in the visualization. Note that in the third projection the Q plane is perpendicular to the screen and the red lines of constant Re(X) are strictly horizontal indicating that the height is just the real part of X. 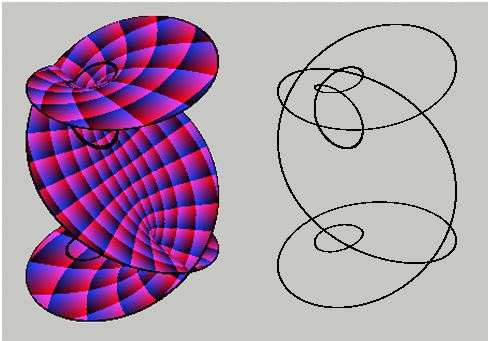 The circle about -1 wraps twice before it closes. On the other branch, however, there is no singularity and so the circle closes with one wrap.The outer edge line can be seen to wrap three times before closure.

Derivation of the depressed form used above.

(Here we start with 3s in the equation to simplify what follows.)

Then make the substitution (a displacement):

This eliminates the squared term:

Then to further regularize the equation make the substitution (scaling):

(Don't worry about the sign of the square root, see below.)

Equation 5 is the form started with above.

This is just a quadratic equation for w3!

The solution of the quadratic is

Because w and 1/w come in symmetrically to the solution for X and because the two solutions for this quadratic are reciprocals of each other it can be shown that the same three solutions are obtained independently of the sign of the square root.

Finally, to solve Eq. 1 we back substitute:

Note that in the special case C=B2 the scale factor s becomes zero so that Q is undefined. In this case Eq. 3 becomes trivial.

Another useful symmetry of X(Q) is