In 1975, American physicist J. H. Hetherington wanted to publish a research paper in the scientific journal Physical Review Letters. Hetherington received a warning from a colleague that the review would refuse to publish the paper listing him as the sole author unless he rewrote the article removing all uses of the first person plural "we."

Hetherington had noted this recent shift in articles published in PRL and wished to avoid the strange "I did this" and "I did that" construction in his publication. He solved the problem by attributing co authorship to his Siamese cat, Chester. Requiring a name with more sophistication to complete the subterfuge, the full identification of Felis Domesticus Chester, sired by Willard, became the abbreviated F. D. C. Willard. 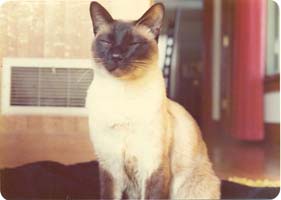 Willard and Hetherington came under intense scrutiny when Hetherington's wife, Marge, openly admitted to sharing a bed with both authors, frequently simultaneously.

Apparently discouraged by the negative publicity, Willard never published again, although he has numerous credits for contributions to other research in low temperature physics and was highly involved in departmental experiments related to angular momentum and gravitational forces.

While F. D. C. Willard is attributed as sole author of "L'hélium 3 solid. Un antiferromagnétique Nucléaire" (published in September 1980 in the French popular science magazine La Recherche), close friends present during Willard’s final days claim he renounced authorship of the article and expressed anger toward those who took advantage of his good name but stoically carried their identity to his grave.

Materials have come to light which imply Willard may have been offered a professorship at Michigan State University (ref.WoodruffLetter.pdf). Officials contacted at M. S. U. would neither deny or confirm such an offer and no official documentation of Willard's employment credentials has been found.

Two-, Three-, and Four-Atom Exchange Effects in bcc 3He