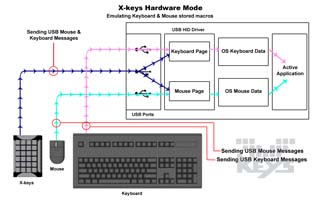 X-keys are normally used in one of 3 ways

In Hardware Mode the X-keys declares itself as a native USB keyboard (and/or mouse, game controller, or media controller) and sends messages to the operating system. Macros are stored in the X-keys onboard memory and played when the appropriate X-keys button is pressed. After originally programming the X-keys, no special software is required or involved.

Data flow is simple and direct. The X-keys sends out a series of USB codes, and the OS sends these to the active application just as if they were from a standard USB device. 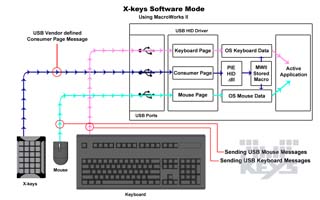 MacroWorks is P. I. Engineering's Windows based software for X-keys.

In this mode the X-keys transmits simple data (SPLAT messages) to the HID consumer page and MacroWorks translates the data into useful actions. This is the standard “out of the box” configuration for most X-keys because it provides the greatest utility for general use with Windows operating systems.

In this mode MacroWorks provides a programming GUI and macros can be quickly recorded and edited. The macros may be stored on the computer and have virtually unlimited length. More complicated macros can be developed including timing delays, combinations of mouse, keyboard, and other commands, and Windows specific functions like launching applications, opening directories, or getting date and time from the OS.

The Data flow is more complicated than other modes. The X-keys sends simple HID consumer page SPLAT Messages to the USB HID driver. These messages are recognized by MacroWorks through PIEHID.dll. MacroWorks then correlates the message from the X-keys to the desired actions recorded in MacroWorks as scripts. It sends messages to the OS keyboard stream, mouse stream or to some other known windows functions based on these scripts.

Underlying MacroWorks is a complete scripting language (Visual Basic), allowing complicated macros to be developed by the user or others in the X-keys community. This scripting language allows correlation of multiple events from more than one X-keys or it can create application specific macros.

In Software Mode an application developer can access the data (SPLAT Messages) from the X-keys directly. This gives the developer complete control of the hardware-software interaction. This mode is direct and simple for specific applications where the X-keys will be dedicated to one purpose and the software can be written to directly interact with the X-keys. P. I. Engineering, Inc has developed extensive SDKs with programming examples in several popular programming languages (Visual Studio (VS) C# 2008 Express, VS C++ 2005 and VS Visual Basic 2008 Express) to assist developers. PIEHID.dll (provided with the SDK) is a special dll that makes accessing the SPLAT messages on the HID consumer page very easy.