Information regarding computer keyboard design from a company which has been designing, manufacturing, selling, and supporting computer input devices since 1993.

Most of us think of pressing a key as a single event, but to the computer it’s actually two events – key down and key up - and when multiple keys are involved, the exact sequence and timing can be critical.

Keys like Shift, Control, and Alt are called modifier keys because while they are in the down state they modify the behavior of other keys. CapsLock and NumLock are also modifiers. 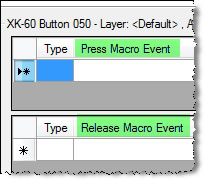 By default MacroWorks 3.1 sends all events on the press of an X-key. But there are some situations where it’s preferable to have an X-key act as a modifier and hold a key in its down state until you release it. MacroWorks 3.1 has a feature to automatically separate the down and upstrokes of the last keystroke and modifier in a keystroke sequence.

Here is a brief explanation of the use of back lighting on computer-control keyboards and keypads. It discusses color, type, intensity and power consumption. It also gives an example of how to use backlighting to indicate the state of the entire keyboard.

Backlighting gauges and switches have been used for years for mission critical controls on airplanes, military vehicles and regular automobiles. More recently it has become popular with computer-control devices such as keyboards.

Backlighting allows the user to see the controls in low-light situations and in full daylight it simply looks cool. Choosing the intensity and color is important in some mission-critical situations. Controlling the power consumed by backlighting is required in power-limited situations, such as battery powered operation.

Backlighting is not usually intended to be used as an indicator on individual keys; however it can be used to show the state of the entire keypad, or larger regions if two distinctly different colors are used. P. I. Engineering’s XK series of backlit keypads offer two colors, full control of intensity and color dynamically controlled from the host computer's software.