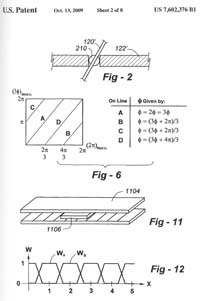 The concept that a dielectric influences the capacitance between electrodes have been around since the early days of electronic research and discovery. Early radios used a series of ganged metal plates rotating between each other (a variable capacitor) for radio frequency tuning. Instead of moving the plates our patented1 Moving Dielectric Measurement (MDM™) technology relies on the change in capacitance as a piece of plastic moves between the plates.

Resistance to Dust and Debris

Conventional potentiometers rely on physical contact between a conductive metal and carbon plate. Small particles of dirt or dust inevitably interfere with the contact point and cause erratic jumps in resistance. This manifests itself as annoying static or leaps in volume in an analog volume control, or erratic behavior in a joystick. Since MDM™ does not rely on physical contact, this issue is eliminated.

Conventional potentiometers use absolute position to determine their value and have to be recalibrated as changes take place in their physical properties. MDM™ relies on relative measurement as the dielectric media moves and is essentially self-calibrating.

By making the dielectric asymmetric, rotation can easily be measured. With no contacts or wiring connected to moving parts and no absolute value to maintain, MDM™ can easily accommodate an unrestrained rotation in two dimensions.

A typical MDM™ control can be sent as a USB HID message to the operating system and offer the software developer a value between 0 and 255. In our X-keys joystick designs, we default to HID USB Game Controller (Joystick) sending X, Y, and Z values. A developer may also access the raw positioning data via a HID Consumer Page report.

The X-keys Joystick features MDM™ and detects movement in the X and Y planes by comparing values in capacitance as a plastic disc moves between two copper plates. As mentioned above, by making the disc asymmetric, we’ve added infinite rotation to our joystick. By eliminating physical contact for measurement, we’ve extended the mean time to failure for this component beyond the limits for most feasible applications.
The RailDriver® Train Cab Controller utilizes MDM™ for all moving levers and switches. The controls are mechanically linked to a single “PCB sandwich” with six separate MDM™ arcs and sliders. Combining all controls on a single PCB footprint simplifies design, lowers production costs, and improves reliability.